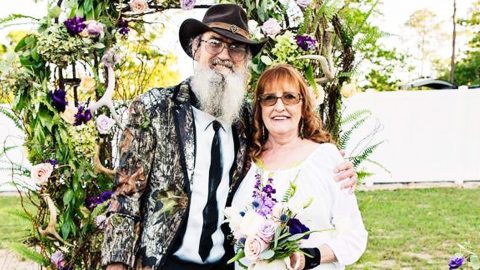 It may come as a surprise to some fans of the popular A&E reality show Duck Dynasty that crazy Uncle Si is spoken for.

Unlike the rest of his family, he is never seen with a significant other, but he has been married since 1971 to a woman who he adoringly calls Miss Christine.

Hey Jack! Just wanted to share a new family photo from our big day! Don't forget to check out US Weekly to read about…

During a behind the scenes interview with ABC News, he reveals he had to ask Miss Christine for her hand in marriage quite a few times.

“I asked this woman to marry me at least 100 times. She finally said yes and hey, that’s the end of that story,” he says.

Hey! What's your favorite song from our ceremony? ONLY AVAILABLE on #iTunes Click here to download "Si Robertson: Me and…

As any fan of the show, we have wondered why the woman who keeps Si in check is not featured! According to an interview in Us Weekly, Si reveals that Miss Christine has a “better sense” than his whole family for choosing not to appear on Duck Dynasty.

The real reason she has chosen to stay out of the limelight is the rigorous filming schedule.

“Sometimes we film 12 hours a day,” Si reveals. “And she’s just not healthy enough to go through the rigors of that. But, ah, it ain’t no big deal. She wants no part of it anyway. She’s been married to me for 43 years. The last thing she needs is to watch us on a TV show.”

Although he is arguably the most well-known Robertson, he doesn’t always like being the center of attention.

“Celebrity life is not all it’s cracked up to be!” he shares. “If I had a choice to go somewhere or stay home, I’d stay home. I’m a homebody. Christine’s the same.”

Si is also a romantic at heart. For the couple’s 43rd anniversary, they renewed their vows and he recorded an entire album dedicated to his “Smokin’ Hot Honey”. Take a listen to one of his songs below.

You'll love my album that I made for my #SmokinHotHoney, my wife, Christine. I surprised her with all of these original…