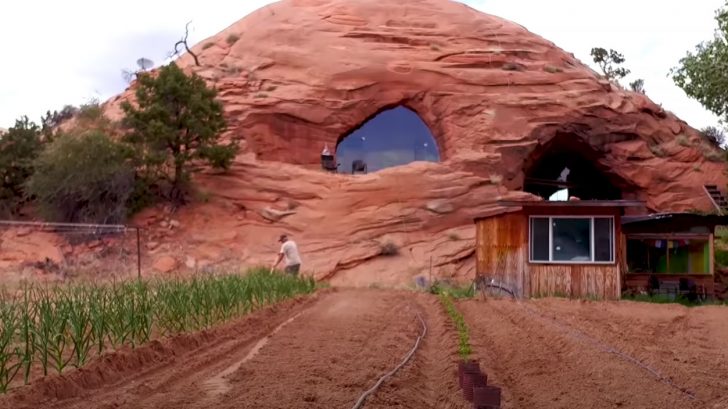 Grant Johnson is a Utah resident who has worked hard to become completely off the grid. He moved to Utah at 17 years old where he worked off and on for different mining companies. It was during this time where he learned the necessary skills he would later use to build his 5,700 square-foot dream home.

In 1980, Johnson purchased 40 acres of land just outside of Boulder, Utah where the nearest stoplight is over 2 hours away. He lived in a trailer on the property for 25 years without any electricity or running water while he spent 20 of those years building his home into the side of the mountain. In 1995 he blasted a small tunnel which started his idea of building a home. He described it in an interview:

“From the first blast I was committed and then it was like, 8 winters probably of blasting. Around 2003 or so, I was done blasting then it sat a long time [while] trying to come up with the money and decide what to do.”

The spacious cave house features a music room, as well as 2 bedrooms for guests.

The entire place is off-grid and powered by a 22-foot water wheel that generates electricity, waters crops, and allows Johnson to raise cows, horses, and pigs.

Watch the video below for the full tour!