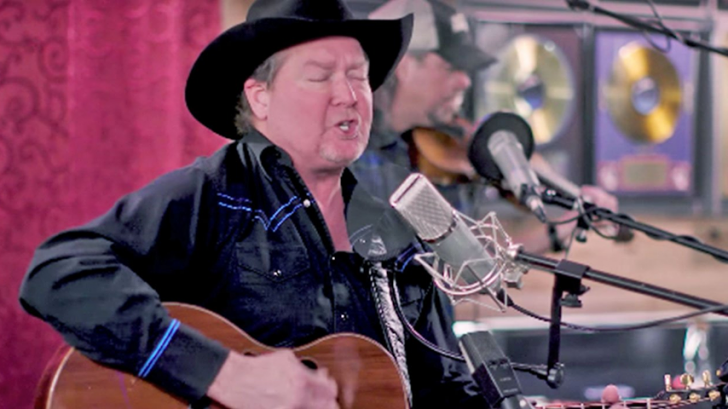 Performing at the famous George Jones Museum in Nashville, Tennessee, Tracy Lawrence brought nothing short of greatness for his session with Country Rebel.

He and his band sang several of his fan favorite songs including “Time Marches On” and “Find Out Who Your Friends Are.”

Coincidentally, George Jones appeared in the official music video for “Find Out Who Your Friends Are,” so it was only fitting that Lawrence performed this song during his session. Check out the video below and see if you can name a few of the other notable cameos!

Lawrence released “Find Out Who Your Friends Are” as the lead-off single for his 2007 album For The Love. After the album’s release, radio stations began playing another version with Tim McGraw and Kenny Chesney on background vocals, and that version went to number one on the Billboard Hot Country Songs chart.

“Find Out Who Your Friends Are” became Lawrence’s first number one since “Time Marches On” took over the top spot ten years prior. Even though this song was released over ten years ago, Lawrence still performs it as though it is a brand new song – with high energy and passion for the lyrics.

When he first heard the song, Lawrence knew he had to record it.

“I just loved the message of it, I thought it was a great leadoff single because for me because it applies to so many highs and lows I’ve had in this business I mean just looking back and realizing who my true friends were,” he said, according to Net Music Countdown. “I think the message is universal for everybody you know, we’ve all been that guy on the weekend we’ve had to call somebody to drag us out of a ditch or bum a couch when we’re a little down on our funds or can I bum a six pack, whatever the situation was however small or however grand it was and that’s the kind of stuff I looked for that I enjoy singing stuff that has a good message.”

Watch Lawrence perform “Find Out Who Your Friends Are” at the famed George Jones Museum below and make sure you subscribe to Country Rebel’s YouTube channel to be the first to see other great country performances!