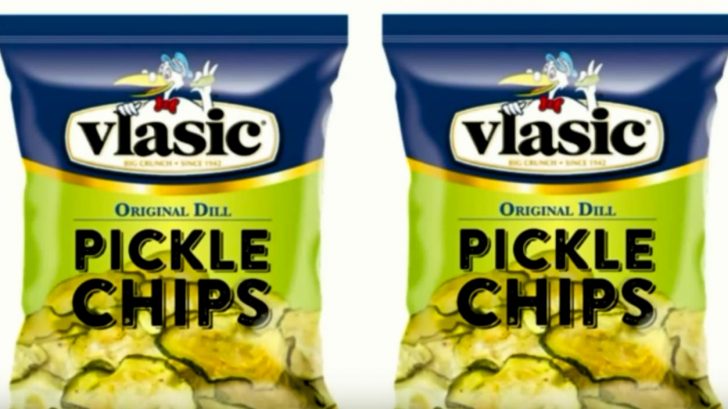 Over 28 million of those pounds can be attributed to Super Bowl Sunday. No wonder why so many of the big game’s most iconic commercials have been for chips!

While there are plenty of potato chip flavors out there, the South Florida Reporter found that plain chips still reign supreme as the all-time best-selling flavor in the United States. Barbecue flavored chips come in second place, which makes sense, because they were the first flavored chips ever made.

Another popular chip flavor is much newer than its barbecue brother, but is quickly becoming a new consumer favorite. Of course, we’re talking about the heavenly creation known as dill pickle flavored chips.

You are cordially invited to the marriage of me and this bag of Utz dill pickle potato chips. I expect our union to be brief but incredibly satisfying. pic.twitter.com/Y0vzKnDEPn

In the hospital, they had a snack machine with Lay's Dill Pickle chips. I must have more of these in my life! pic.twitter.com/xmhStwQvFa

my love for dill pickle potato chips is so real

If you’re one of the many who craves crispy, pickle-flavored potatoes, we’ve got news for you. A new pickle chip is coming to town, but this one is unlike any other.

As revealed on April 11 in an article published by Food Business News, the famous pickle brand Vlasic is about to introduce its own pickle chips to store shelves. But unlike other pickle chips, Vlasic’s crisps are made from real pickles, not potatoes.

Thomas M. McGough, co-chief operating officer and executive vice-president at Conagra Brands, the larger company which Vlasic falls under, explained why consumers will enjoy the real pickle chips vs. their pickle-flavored potato counterparts. As he said:

“But pickles themselves are a great snack, essentially no calories or carbs. But eating pickles out of a conventional jar is inconvenient and messy, and pickle snacks are actually becoming a thing, particularly in c-stores. So we’ve created Vlasic single-serve pickle slices and also a Vlasic vacuum-fried pickle chips that taste absolutely fantastic.”

Vlasic is Releasing Dill Pickle Chips. Eventually all foods will come in chip form, and we're OK with that. https://t.co/Ac3rPGGeXj pic.twitter.com/FAjPiLugt4

Y’all will have to be the judge when it comes to just how good the new pickle chips really are, but you sadly can’t taste them quite yet. No release date for the chips has been revealed as of press time.

So while you’ll have to stick with your dill pickle potato chips for now, be on the lookout for the new pickle chips in a store near you. We’re so anxious to try them, and we’re sure you are too!