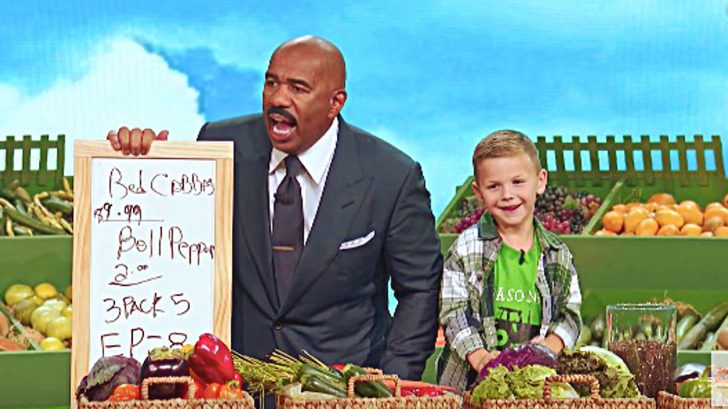 In all the seasons of Little Big Shots, we’ve learned that things can go crazy in an instant. When children are involved, you can never expect anything other than the unexpected.

Some of the show’s most hilarious moments result from the off-the-wall things the children say or do.

The situations are made all the more comical thanks to the show’s host Steve Harvey, who often has something equally priceless to say.

The Cutest Little Farmer Ever

In its third season, Little Big Shots welcomed children with more unique talents than we’ve ever seen before. One episode placed the spotlight on a six-year-old farmer named Mason, who loves growing and selling his own vegetables.

Congrats to Mason from WV for being on Little Big Shots. His grandmother is my childhood friend and his mom is my daughter's childhood friend. Great family! pic.twitter.com/0wdjYLbl7f

The stage was transformed into a colorful farmers market, with veggies of all shapes and sizes on display for the crowd to see.

Mason stood proudly behind the main table with Steve, who welcomed everybody to the little guy’s market.

It didn’t take long for things to take a hilarious turn.

Mason Is A Tough Salesman

Steve, wanting to help Mason make his first sale, asked him how much he was wanting for his delicious-looking red cabbage.

In his adorable Southern twang, Mason went “Well…” before counting on his fingers and responding that the cabbage should cost ten dollars per pound.

Shocked, Steve reached forward and picked up the cabbage to feel its weight, saying, “That’s about a thirty dollar cabbage.“

Even though Steve tried to encourage Mason to list his veggies for a lower price, the little guy wasn’t having it. By the time they got to the eggplant, Mason proudly shouted that it should cost eight dollars.

Steve’s response to that was hysterical. He convinced Mason to earn the pity of the audience by telling them that his family really needed the money from these veggies to send his sister to school. Wanting him to lay it on thick, he also said he should mention that his father’s out of work and his mom has to stay at home.

That’s when the true chaos erupted, as Mason took Steve’s story and cranked it to the extreme. You can see what happened when you check out the video below.

If you were chuckling earlier, you’ll be downright cracking up by the time you reach the end! Mason has to be the funniest farmer out there!