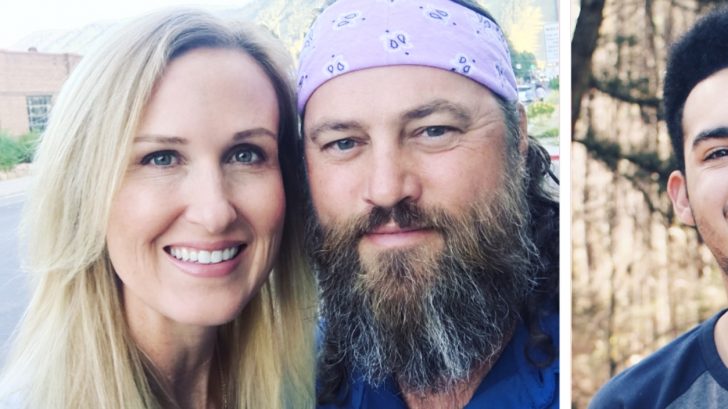 Even though Duck Dynasty ended in 2017 after 11 seasons on the air, we still enjoy keeping up with the Robertson family. The show started in 2012 and followed the lives of the Robertsons, a large Louisiana family who ran a duck hunting company called Duck Commander.

Willie, the CEO of the company, his wife Korie, and their kids appeared as one of the focal points of the show. They are parents to John Luke, Sadie, Willie Jr., and Bella. In Season 5, we were introduced to Rebecca, who was an exchange student that stayed with them when she was 16 and became an unofficial member of their family. In the last season, we were also introduced to Rowdy, a 12-year-old boy they adopted.

Willie has great scenes with each of his kids, but one of our favorites was when he tried to help coach Little Will’s football team. He and his son ended up in a footrace, and it ended in a comical fashion!

Little Will, who Willie and Korie adopted as a baby, had to have been in middle school when this aired, but it feels like we’ve known him since he was a little kid!

This little stud is 16 today! And he’s not so little anymore ??Clearly we adore him!! His laugh fills our home and his smile lights up the world. He’s a loyal friend and a gentle leader. Happy Birthday, sweet Will!! Praying that 16 is filled with fun, friends and good memories! That you grow in wisdom, faith, and perseverance, that you learn the lessons God has for you in each day, that you love Jesus and others whole-heartedly, and that you know that you are LOVED immeasurably, beyond what you can ever imagine. God has great plans for you, and I️ love every second of being your mom and am here cheering you on every step of the way ❤️ #strongandkindkids #happybirthday

Now…he’s 17 years old and we can’t believe how grown up he looks. Even at the end of the series, he still looked like a young boy.

Tomorrow night @duckdynastyae follows along for the day Rowdy officially became a Robertson!! Family moments (like the day we got a new son!) are sometimes a difficult decision for us to film because they are so personal, but I’m always so glad we did!! I bawled watching it and remembering what an incredibly special day that was!! Can’t wait for you to see it!! Wednesday 9/8cst @aetv #duckdynasty #dontmissit #adoption

But now, he looks like a man – with facial hair and everything!

Korie took him tuxedo shopping so they could find just the right one, but they might have had to buy more than one, seeing as he is going to three this year!

“How is [Willie Jr.] this grown up ???Such a fun day tux shopping (he’s going to 3 proms!!) and had to get him looking good for [Tim Tebow Foundation] gala this weekend,” she captioned the photos of her and her teenage son in the store.

She also noted that the woman helping them out pointed out how polite and kind Will was, but still can’t get over how grown up he looks! Check out the photos below.

How is @willrob.jr this grown up ???Such a fun day tux shopping (he’s going to 3 proms!!) and had to get him looking good for @timtebowfoundation gala this weekend. The lady who helped us bragged on how polite and kind he was the whole time. Kind, respectful, joyful, fun, talented! All of that and more! Nothing better than having others acknowledge the good in your kiddos. He’s becoming such a great man! And I’m one #proudmom

To see just how much he’s grown, check out this music video he did back in 2014, which was two years after Duck Dynasty began.