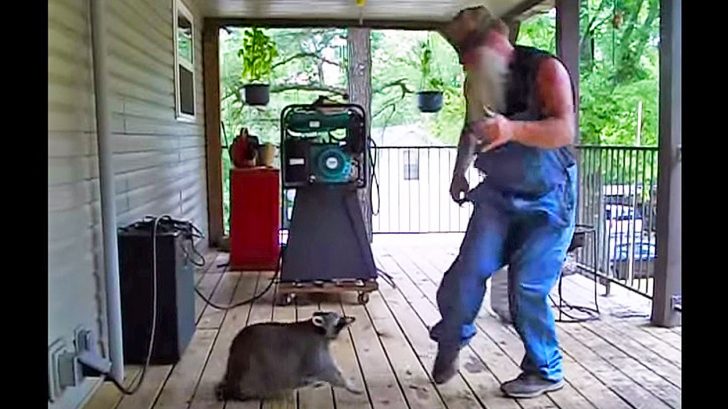 Have You Ever Seen A Raccoon Dance?

Videos of dancing dogs and cats are all over the Internet, but a dancing raccoon is definitely something unique!

In a YouTube video called “The Hillbilly Slide and One Mad Coon”, Mark “Coonrippy” Brown dances on the front porch with his pet raccoon.

Mark and his wife, Connie, would often film videos of Mark with their pet raccoons Gunshow and Rebekah.

Sadly, since the “Hillbilly Slide” video was posted, Gunshow passed away and Rebekah was taken from the Browns by the Tennessee Wildlife Resources Agency. The Browns say that the agency took Rebekah when they learned that the couple was keeping her as a pet and that she was famous YouTube star.

But back in simpler times, the Browns and their raccoons had a lot of fun with one another. The “Hillbilly Slide” video is one of their most popular videos to this date, with over 2 million views so far.

In the video, Mark starts dancing on his own, sliding from side to side and clapping his hands while the raccoon looks on.

But it isn’t long before the raccoon decides that it wants to join in on the fun as well, and it latches on tight to Mark’s leg while he shuffles from side to side.

The Finale Takes A Turn…

The raccoon continues to get more and more involved in the dance as the video goes on, with Mark eventually grabbing its hands and dancing with it like a small child.

But towards the end the raccoon shows its “mad” side when it comes running at Mark, who almost jumps over the porch railing to get away. The raccoon must have been ready to have the dance floor all to itself!

You can learn more about Mark and his dancing raccoon buddy when you check out their interview in the video below!