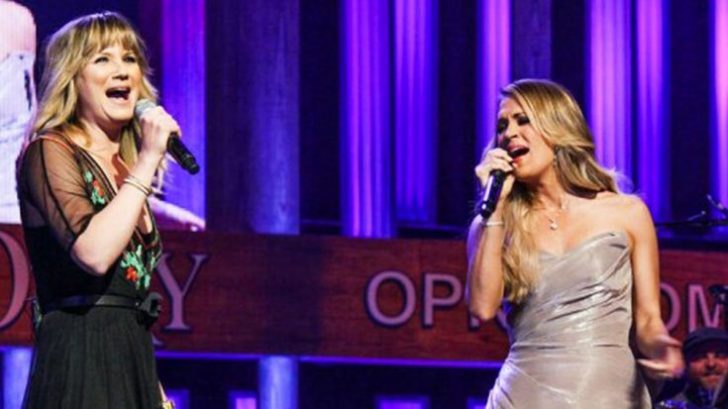 Even Dolly Parton would have been impressed by Carrie Underwood and Jennifer Nettles‘ performance of her powerful workplace anthem, “9 to 5!”  The duo performed Parton’s hit song on the famed stage of the Grand Ole Opry during a show that took place in 2014.

With an immense catalog of Parton’s songs to choose from, Underwood and Nettles certainly picked a good one when they opted for “9 to 5.” The tune was released in 1980 after Parton wrote it for a comedic film she starred in, which was also titled 9 to 5.

Both the song and movie boldly campaigned for women to be treated better in in the workplace. But neither were too serious, as they both provided a few good laughs for those who have been through similar experiences in life.

Clearly a large number of people were able to relate to the song, because it topped the Billboard Hot Country Singles chart and the all-genre Billboard Top 100. The tune also led to four Grammy nominations and two wins for Parton. It pretty much goes without saying that “9 to 5” is one of the most popular songs of Parton’s entire career.

That’s why we’re sure the Opry crowd was pleasantly entertained when Underwood and Nettles took to the stage to sing their on passionate rendition of the classic song. Believe it or not, these two powerhouse vocalists didn’t even rehearse before they joined one another at the Opry that day!

Go ahead and watch Underwood and Nettles sing “9 to 5” in the video below. You won’t be disappointed with what you hear…mark our words!