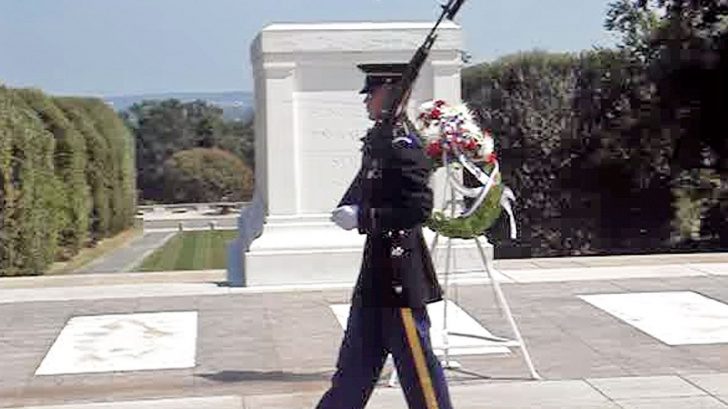 The Tomb Of the Unknowns continues to be a highly regarded monument that is expected to be given nothing but the highest of respects.

Unveiled in 1921, this monument is dedicated to service members whose remains could not be identified, including those who served in World War I, World War II, the Korean War and the Vietnam War.

The emotional weight such a monument carries is tremendous. Honoring soldiers this way is beyond a doubt one of the most respectful things you’ll ever see which is also why it is guarded 24 hours a day, seven days a week regardless of weather.

Acting in a respectful manner is expected when you visit the Tomb of the Unknowns. However, not everyone acts in that way. Once, a woman walked past the barricades to take a photo, and was reprimanded by soldiers guarding the Tomb.

In another video clip captured by a tourist, we are able to watch a soldier guard the Tomb. Unfortunately in the background, we are also able to hear loud laughter and various sounds of tom foolery during this mandated time of silence and respect.

This act of clear disrespect did not sit too well with the guard, who abruptly halted his routine to firmly and directly tell the rowdy audience members to zip it!

He stops marching, turns around and loudly says, “It is requested that everyone maintains a level of silence and respect.”

Pure silence spread throughout the monument. The guard, clearly upset with the lack of order he received, waits a few silent seconds before resuming the sacred routine. Can we get a round of applause in light of this incredible gentleman maintaining order and respect for those that sacrificed themselves for what we are fortunate enough to have today?

You can watch the powerful video below.